Dvbris is now an all steel 54 foot narrowboat, which until June 2003 was fitted with a 1967 Lister SR2 and hydraulic gearbox. She now has a Perkins 4.108 marine engine with an 18" propeller. Dvbris has an unusual hull, as she has got a 9 inch keel.

As our families have started to grow, we needed more space or an additional boat. We decided to go for the 'cheaper' option and have a stretch job done. To see more about the stretch job click here or on the relevant side button.

For more of her history read on below. 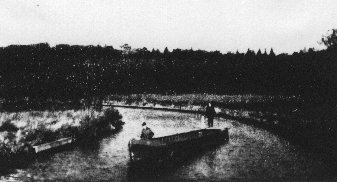 Dvbris (Miranda) on her voyage to be fitted out.
Photograph by courtesy of The Wyvern Shipping Company.

Our boat was built in 1967 for The Wyvern Shipping Company as a hire boat. She was originally named 'Miranda' with a wooden super structure. She served as a hire boat for a number of years until she retired in 1975, and was subsequently sold off. Not long after a fire gutted her. In the early 80's she was fitted with a steel top (we think that this added weight has reduced her speed and made her more difficult to stop - do any of you have other theories?). Anyway, with this new top she was renamed 'Saville Row'.

In 1995 we (2 families) purchased 'Saville Row' as a major project and floating holiday home.